Changing Minds - The Importance of Character 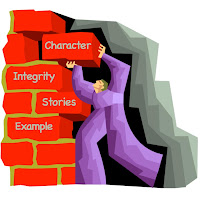 Whether you are a leader of a nation, corporation, organization, club or other collection of people, one of your first tasks is to get people working in the same direction.  In prior posts we have talked about the importance of vision in bringing people together behind one cause.  But we have not talked about what to do when you have a vision that is not necessarily shared by others in the group.  The problem is not that they don't understand the vision.  They understand perfectly.  However, they disagree with the goal, methods, do not trust that the desired outcome is appropriate, or just generally think the idea is wrongheaded.

What do you do to change the minds of the people you wish to lead into the future?

In his book Changing Minds, Howard Gardner takes on the challenge of describing this process of bringing your message to your audience, and of successfully changing how people think and feel about the goals you have set before them.  Although there are many factors to consider, in this blog entry I want to focus on just one that I believe to be so powerful that if it is not properly considered and respected it will knock the blocks out from under everything you are trying to accomplish.

Gardner says "To change minds effectively, leaders make use of two tools: the stories that they tell, and the lives that they lead." (Changing Minds, Howard Gardner, P. 69)  We will cover the concept of story telling in another post, but here I want to focus on the importance of the lives leaders lead.

Imagine a leader of a country who runs for office on a platform founded on upholding the laws of the country, who is then found guilty of tax evasion; the leader of a union organization who secretly has his home built by non-union labor to save money; a leader of a corporation who presses for wage concessions from the employees to save the company, who then accepts a multimillion dollar salary or bonus.  These leaders, regardless of how impressive they have been, have destroyed their credibility.

To accomplish your goals you need a dedicated group of people working toward the same ends - your desired ends.  As Gardner says, the stories you tell will connect you and your desired goals to the people who will help make it happen.  But, for your team to follow you through thick and thin they must trust you.  Although trust is based on a number of things, in summary people will trust you if they can see that you have integrity, are competent, have a track record of success, and care about them.  In short, that you are of good character.

If the life you lead is not consistent with the goals you express, and does not provide evidence that you have an interest in the well being of those who follow you, you will have undermined your character in the eyes of those who might be your most important asset.  You will be unable to create the energy and motivation in your team needed to move the organization toward any significant goal.

Gardner says "... impressive leaders have integrity.  They take time for daily analysis and reflection... They are marked by openness to changes in the world and in oneself... [are flexible] in the presentation of their fundamental themes... [and have a] deep commitment to a mission coupled with humility about one's actual potency."  (Changing Minds, P 110-111)

"Leaders cannot be effective - and cannot call for sacrifice - unless their stories and their persons strike a resonant chord with their audiences." (Changing Minds, P. 75)  When a leader's "person" is out of sync with what a leader says, and when a leader's behavior does not match the behavior that is being asked of the organization, there is little chance that the leader can be successful.

The life you lead speaks volumes to others about whether you are worthy of their support.

Jon Huntsman, a self made billionaire said "There are no moral shortcuts in the game of business -- or life. There are, basically, three kinds of people: the unsuccessful, the temporarily successful, and those who become and remain successful. The difference is character."  ( http://knowledge.emory.edu/article.cfm?articleid=888)
Posted by Jim at 10:10:00 AM